A Little Self Care 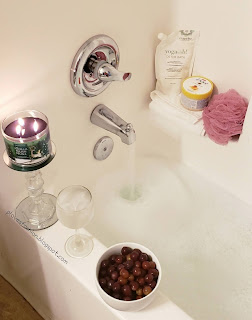 Today I wanted to take some time out to have a self night. All that's going on in the world right now, it can become a little overwhelming.  Mentally I'm doing okay, but I have my days when I don't feel the greatest. Since I have depression and anxiety, I try to recognize the symptoms and cope with my feelings before I feel overwhelmed. 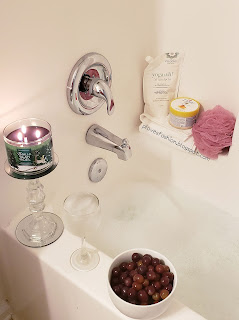 I also wanted to do a self care day because I've been feeling a little run down physically. I know that it's probably related to my iron Deficiency Anemia again because for the past few days I don't have much energy and I've been feeling super tired. I love taking showers, but taking a nice warm bath is so relaxing. 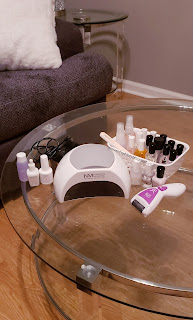 My nails have become brittle again, another issue I have due to iron Deficiency  Anemia so I cut them short. My nails were also breaking and I rather grow them again instead of having broken brittle nails. I usually keep my nails short in the Winter since the weather can also make my nails brittle. I wanted to show my nails a little TLC today. 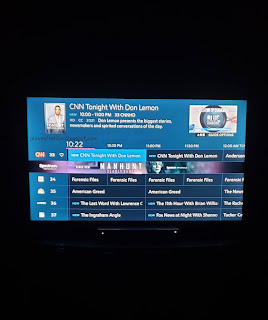 I try to limit watching the news, but I do like to watch Don Lemon and Chris Cuomo at night. I might watch this CNN Tonight until I fall asleep.

In speaking of all things self care, I'm going to take a little blogging break for a few weeks. This isn't a long break, I just need a little down time since I've been going pretty consistently the past few months, and especially during the holidays. Make sure to follow me on Instagram , I'll be posting on there, until I return to my blog. Talk with you soon!!

Self-care is important.
I too have anxiety, and sometimes forget to care for myself. See you here when you return!

A self care day sounds perfect, Pilar. It's so important for us to have "me time," and I'm glad you realize that. The bath looks wonderful using all your pamper products. I love how you light candles all through your home. It makes everything so cozy and nice. Have a nice break, and I hope you come back feeling energized. We all need to have our spirits lifted at this time, and just reading your blog post today helped me as well.

I agree with everything going on in the world, it's good to have a self care day. Your bath looks so relaxing! Enjoy your break and I hope you're feeling better!

I hope you enjoy your blogging break. Best wishes for peace and restoration.

Looks absolutely perfect. We all need a little self-care.

I know right! Both of them have good shows too!

Thanks Billie Jo! I try not to forget that self care is important when I have anxiety.

Self care is really important!

Thanks Sheri! As I get older I try to have more self care routines. You're right, having me time is important. I'm glad reading my blog today helped you my friend!

Thanks Marie! Looking forward to healing and brighter days for the world!

I also love relax in the bathtub but unfortunately now I only have a shower :( :( Regards 😍😍

Self care is very important esp when you deal with things like depression. Sometimes winter makes things worse so be sure and take extra care of you. I avoid the news and scroll past a bunch of stuff on FB...I try to not let the things of the world eat at me .....

Thanks for sharing those ideas.
I hope you'll visit my blog soon. Have a good week-end!

Sometimes we need this time for ourselves. For your health and psyche. Take care of yourself and stay safe!

That's too bad you don't have a bathtub, but showers can be just as relaxing!

Very true Pam. I notice that my depression tends to be worse during the Winter, so I try to make self care a top priority. I watch the news regularly, but I try to limit some of what I watch. I hope you are doing well!

Thanks and you're welcome Marianela! Have a great week!

it's so important to take time to rest and recharge - I hope you enjoy your blog break and that your day taking care of yourself made you feel better :)

Hope that your week is off to a good start :) A public holiday here today which is nice, we will go for a picnic :)

My nails are always brittle and thin. I have been getting them done at the salon but it gets so expensive. I just need something on mine so they do not keep breaking short. I have seen a lot of girls us the press ons lately. They look good but Im sure those things would pop off as I am rough on nails.
Lisa

Self care is such a must especially with everything going on in the world now. I'm with on limiting the news especially at night before bed. We do enjoy the banter when Chris Cuomo hands it off to Don Lemon. They have such a cute bromance.

Thanks Mica! I'm enjoying my blog break :) Have a great weekend and I hope you enjoyed your picnic!

At one point when my nails were brittle, I would get them done at the salon. The acrylic nails helped protect my nails a lot during the Winter. I haven't gotten my nails done at the salon since college! I've been seeing the press on nails a lot too. I was thinking about getting press on nails, but I want to grow my nails back healthy since they're so brittle right now. I usually keep them short during the Winter.

I agree Rowena. I try to maintain self care. It helps with my overall health. Depending on how I feel I may skip the 11pm local news. I try to clear my mind before bed. I know! Chris Cuomo and Don Lemon's bromance is so cute!

It's important to take care of yourself. Hope you are doing well.

A Shimmer, A Shadow

Thanks Kelsey! I hope all is well!

Wonderful plan. I would like to have a day like this for me.
Thanks for sharing. I hope you'll visit my blog soon. Have a good week!

Thanks, and you're welcome Marianela!

Hello Everyone! * Disclaimer: This posts contains PR Samples from various brands. I want to thank each brand for sending over product(s) Al... 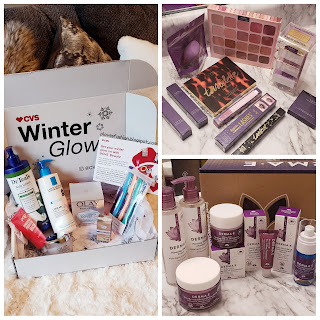